Using A Computer/Smartphone/Tablet From Bed

Using a computer while bedridden can be very difficult, especially for those of us who can't sit up very much, or at all. In this page I'm going to detail my current solution, and outline some previous techniques I and other people have used

Laptops require your hands to be up near the screen which is a lot of holding up one's arms, but is a possibility if you already have one - jump down to the Laptops section
​
Using an iPad or iPhone while in bed, especially while lying on one's back, involves holding it up as well as touching the screen which can be very difficult and cause neck and back and shoulder problems and headaches

I have had a lot of suggestions from people saying to use a projector to project an image of the screen onto the ceiling but I've never seen anybody who's actually done it. I suspect the current resolution available on a standard projector is too low to actually do this really usably, and the requirement of lying in the dark to use it would be limiting for some. Similarly, I've had some people say "Why don't you just use VR?" but nobody's actually been able to really say how this would provide a fully useful solution in practice and I haven't heard of anybody who's usefully done it. If you've tried either of these methods - whether it's actually worked or not - I'd love it if you contact me and let me know how it turned out so I can share your experiences for others to learn from!

Laptops require your hands to be up near the screen to type which is a lot of holding up one's arms.

If you can manage it, there are many stands available if this is something you can do. If you google search for "laptop bed stand" or similar phrases (I suggest you try several variations to cover all the options) and switch to image search you can get a good overview of what's out there, and this do specific searches for those which appeal to you. If you already have a laptop and you can manage the physical requirements this is one of the cheaper solutions.

I've never had a laptop myself since I've been bedridden, but these have been recommended to me as decent stands - feel free to contact me with any further recommendations and I will add them as energy permits:
​

My Setups Through The Years

I am including these here, even though some are wildly out of date to current technology, as they may provide inspiration and suggestions of things you can do - there are a wide range of different solutions I've used over time …

In the late 1990s thin LCD screens weren't common yet and I set up a futon on the floor and made a ledge beside it with milk crates. I used a lap tray to put the keyboard and a trackball on. It was a bit unwieldy - especially as both the keyboard and the trackball needed cables in those days - but you could set up something similar much more easily now with an LCD screen and wireless keyboard and mouse.
In 2007 I had something similar with a large butcher block island designed to go in a kitchen - I think it was from Ikea or similar. I set that beside my adjustable bed and put my computer on that. I was too sick to use a physical keyboard at that time, but any of the keyboard-in-lap ideas would work fine with this too 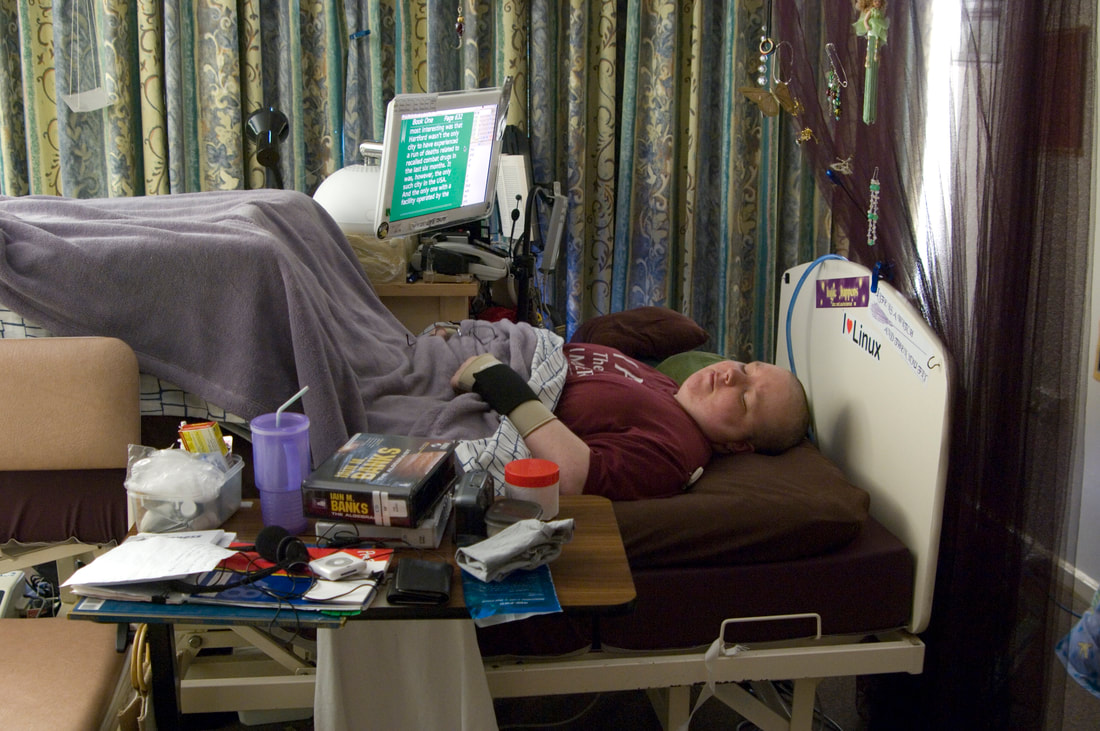 From 2008 for many years I had a special screen mount made for me by Solve Disability Solutions - it was a large vertical pole that was bolted to the side of my adjustable bed, together with a commercial screen mount designed for a desk mount. If you google "lcd screen desk mount" you can see computer mounts similar to the silver parts of this stand, which was the commercial part we used. The biggest problem was that my computer screen was about as heavy as the mount could stand, so it was kind of fragile, but the concept is sound and LCD screens are much lighter now! 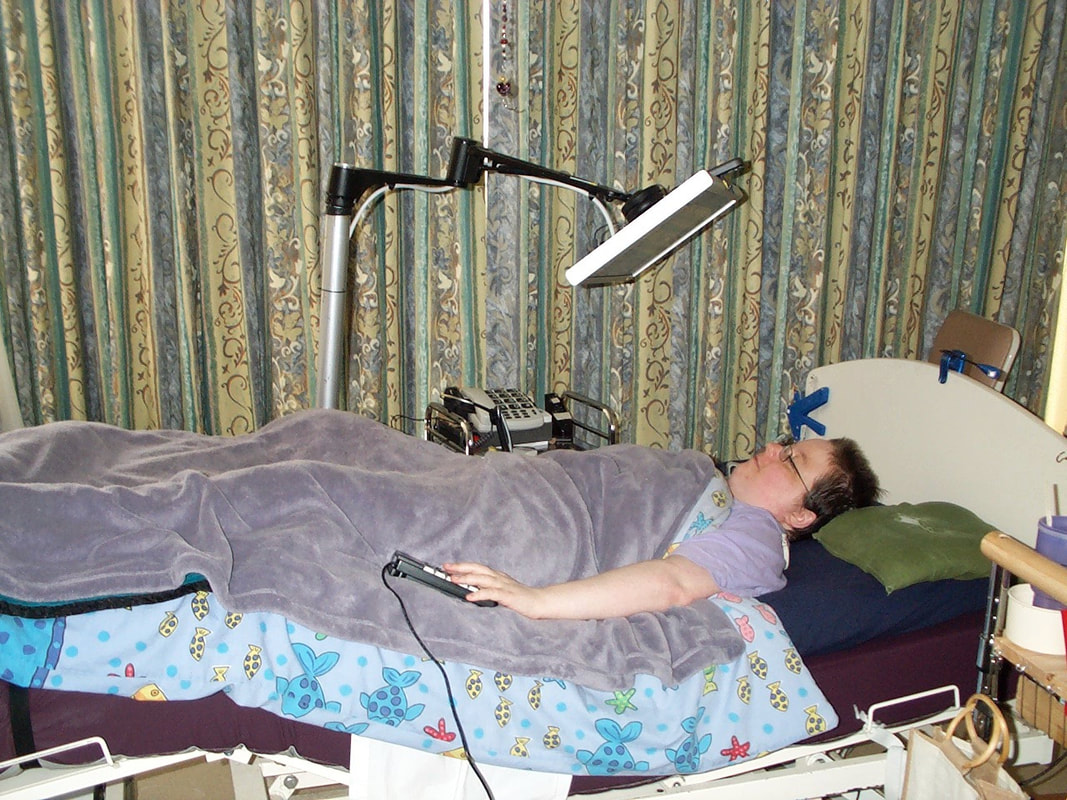 Giesbert Nijhuis designed an awesome 100% downwards pointing computer-in-bed setup for himself. Website is no longer available but some text description survives via the internet archive. I am including it as it may provide inspiration for others.

There are also ridiculously expensive options which get passed around the bedridden community from time to time. They're generally out of reach of most of us due to price, but they're nice to look at! I shall continue to note them here when I have the energy.
​
I hope this page has provided you with some inspiration and ideas for constructing your own computing-in-bed setup! If you have a great setup yourself, I'd love to feature it here - feel free to contact me and when I find some energy I'll add your setup to this page too, so others can benefit. There aren't so many of us who use computers primarily or exclusively from bed, so it's good to be able to see how everybody has arranged things to be able to use them in the ways that work best for us. Happy computing!